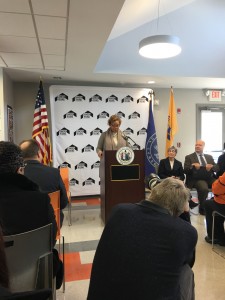 The Michaels Organization is a Key Partner with the Housing Authority and the City on the Revitalization of the Clement T. Branch Village in the Mt. Ephraim South Corridor.

Camden, NJ, December 14, 2016 (Newswire.com) - ​​​​​Standing in front of a backdrop that read “Camden Rising,” city, state and federal officials came together yesterday to celebrate the Department of Housing and Urban Development’s (HUD) announcement that Camden is the recipient of a 2016 Choice Neighborhoods Implementation Grant.

The $13.2 Million grant awarded jointly to the Housing Authority of the City of Camden (HACC) and the City of Camden will be used to revitalize the Clement T. Branch Village public housing site, located in the important Centerville neighborhood. First built in 1941 and now severely distressed, the Clement T. Branch site is the last traditional public housing site in this neighborhood to be redeveloped.

We are privileged to be HACC's partner in transforming their vision for this neighborhood into a reality.

“We are so proud of the unprecedented change being seen in Camden as a result of strong partnerships at the local, state, and federal level,” said Camden Mayor Dana L. Redd at today’s press conference. “The transformative power of this grant can’t be overstated because it will be leveraged against other private and public investments to fund not only new housing, but also better educational opportunities, safer streets, and new business opportunities.”

Joined by both Sen. Bob Menendez and Sen. Cory Booker, as well as Rep. Donald Norcross, Mayor Redd said Camden benefited from the unwavering support of the state’s political leadership. She also credited the active involvement of residents, businesses, and a long list of partners, including nonprofit organizations, colleges, and health providers working in the community.

Michaels Development, an independent operating company of The Michaels Organization (TMO), is the HACC’s private-sector housing developer in the revitalization effort. The development plan includes replacing the distressed site with 176 new townhomes and a 50-unit midrise, designed for seniors and persons with disabilities.  A groundbreaking celebration for the midrise building was held earlier this month.

“We have been working in Camden for more than a decade and we are privileged to be HACC’s partner in transforming their vision for this neighborhood into a reality,” said The Michaels Organization’s President, John J. O’Donnell. Other TMO companies involved in the Choice Neighborhoods effort include Riverside Capital and Interstate Realty Management. IRM’s non-profit partner for Resident Supportive Services, Better Tomorrows, is also a key partner.

Choice Neighborhoods is HUD's signature place-based program, which supports innovative and inclusive strategies that bring public and private partners together to help break the cycle of inter-generational poverty. The program also encourages collaboration between HUD and the Departments of Education, Justice, Treasury and Health and Human Services to support local solutions for sustainable, mixed-income neighborhoods with the affordable housing, safe streets and good schools all families need.

Camden is one of only 5 cities to receive a 2016 Grant out of 34 applications submitted this year. The $13.2 million awarded will be leveraged to raise an additional investment totaling almost $300 million, according to HUD.