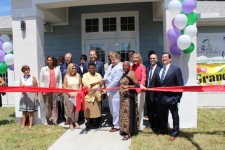 Final Phase of Newtown Revitalization Will Welcome Residents This September

“We are so proud of the significant investment we have been able to make in the historic neighborhood of Newtown, providing not only high-quality affordable and market-rate housing, but also hundreds of jobs for local residents over the past 8 years,” said David Morgan, chairman of the Sarasota Housing Authority Board of Commissioners. “We are grateful for the support of the neighborhood as well as city, county, state, and federal officials in bringing our vision for this neighborhood to life,” Morgan said.

We are so proud that the redevelopment of this site has been the catalyst for reinvestment and revitalization of this important and historic neighborhood.

Final touches on the community are being done now, with leasing expected to start this September. Both previous phases are 100 percent occupied.  Like those previous two phases, this final phase offers public housing, tax credit housing, and market-rate apartments in garden-style walk-ups.

“It has been a privilege to be a partner with such a forward-thinking Housing Authority,” said Jorge Aguirre, vice president of development for The Michaels Development Company. “We look forward to being a partner to this community for years to come.”

Interstate Realty Management is serving as the property manager and will ensure that Janie’s Garden remains a long-term asset to the neighborhood. Community partners include the non-profit organization Better Tomorrows, which will offer resident supportive services, as well as Suncoast Workforce and Goodwill Industries.

Financing for the $14.2 million Phase III includes $8 million in private equity raised through the sale of federal Low Income Housing Tax Credits following an award of $880,000 in annual tax credits from The Florida Housing Finance Corporation. Other funding sources included $1.75 from the Sarasota Housing Authority, $1.96 million from the County of Sarasota and $590,000 from the City of Sarasota. In addition, the development received $80,000 in State Housing Initiatives Partnership (SHIP) funding. US Bank provided $6.4 million in construction financing and The Community Development Trust (CDT) is providing $1 million in permanent financing.  The tax credits were syndicated by Raymond James Tax Credit Funds.

About The Sarasota Housing Authority

Established in 1938, SHA’s mission is to provide quality affordable housing that enhances the lives of our residents. SHA is a quasi-governmental agency, separate and distinct from the city or county government. SHA, with an annual budget of $17 million and staff of 33, provides housing assistance to over 2,000 families as well as various services to strengthen them. In 2013, SHA was voted as the most outstanding housing agency in Florida.

Michaels Development Company and Interstate Realty Management are independent operating companies of The Michaels Organization, a family companies dedicated to excellence in in affordable, mixed-income, military, and student housing. Serving more than 115,000 residents in 370 communities across 35 states, the U.S. Virgin Islands, and the District of Columbia, The Michaels Organization is a national leader in residential real estate, with full-service capabilities in development, property and asset management, construction, finance and tax credit syndication.