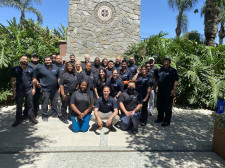 CAMDEN, N.J., September 7, 2021 (Newswire.com) - The Michaels Organization, a national leader in residential real estate, announced today that it has achieved a financial closing for the acquisition of the privatized housing assets on eight military installations. The military housing communities include the on-post family housing for Army, Navy, and Air Force families on both coasts.

"We are honored that the Department of Defense has entrusted us with this opportunity to house heroes and lift the lives of their families," said John J. O'Donnell, Michaels' Chief Executive Officer. "We are honored to serve those who serve our country and their families, and we are grateful to the military's leadership and our financial partners, whose support made this opportunity possible."

Michaels has been an award-winning developer, manager, and owner of privatized military housing since 2004, when it was first selected by the Army as its private-sector partner to develop and rehabilitate the family housing at Ft. Leavenworth, Kansas. Michaels would go on to become the DOD's private-sector housing partner at Ft. Huachuca and Yuma Proving Ground in 2009. Over the past 14 years, Michaels has also served as a fee-manager for seven of the eight housing communities it has acquired. Michaels has been honored with national awards for both the development and management of our military housing communities.

With the acquisition complete, Michaels now owns, manages, and asset manages 11 different military housing locations serving Army, Navy, and Air Force personnel and their families across the country: In Florida, California, Maryland, Virginia, Georgia, Kansas, and Arizona. With this acquisition, which is the largest single acquisition in its history, Michaels military living ownership portfolio has increased to just over 18,000 homes. As part of the acquisition, Michaels has welcomed 53 new employees to our team.

About The Michaels Organization: The Michaels Organization is a national leader in residential real estate offering full-service capabilities in development, property management, construction, and finance. Serving 145,000 residents in more than 425 communities in 35 states, D.C., and the U.S. Virgin Islands, Michaels is committed to crafting housing solutions that jumpstart education, civic engagement and neighborhood prosperity and to creating Communities That Lift Lives.