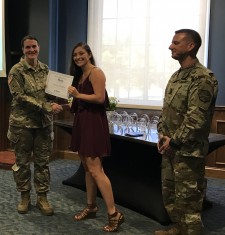 Marlton, NJ, June 26, 2018 (Newswire.com) - ​As a child growing up in the Dominica, Delva Daniel would end each day sitting at the kitchen table, helping count the money her mother earned from selling cakes and pastries and juice to school children on the island. That experience, she says, was instrumental to her love of math and her growing interest in personal finance. This fall, Delva will be heading off to the University of the Virgin Islands, her major accounting, and her sights set on earning her CPA credentials.

Delva’s college journey will be a little easier financially, thanks to a scholarship from The Michaels Organization.

Giving back to the communities where we work is an essential part of how we create communities that lift lives.

“It’s a privilege for our organization to be able to invest in the education of our residents,” said John J. O’Donnell, president of The Michaels Organization. “Giving back to the communities where we work has always been embedded in our corporate culture, and it is an essential part of how we create communities that lift lives,” O’Donnell said.

All residents who live in affordable, mixed-income, student, or military housing communities owned or managed by companies of The Michaels Organization are eligible to apply for scholarships from the educational foundation. The scholarship funds, which are paid directly to the educational institution, can be used at any accredited college, university or vocational school in the country. Students can reapply every year of their undergraduate education.

Foundation funds are raised through private donations from corporations, companies, families, private trusts, and individuals known throughout The Michaels Organization business network.  Michaels’ Founder and Chairman, Michael Levitt and his wife Pat Levitt contribute $2 for every one dollar raised by the Foundation.

For the 2018/2019 academic year, awards were made to 211 students, with scholarships ranging from $2,000 to $10,000. This year's recipients include traditional and nontraditional students living in affordable housing communities, as well as the children of military personnel living on privatized on-post housing owned or managed by The Michaels Organization. Residents of The Michaels Organization’s student housing communities are eligible for scholarships that are offered each fall.

The Michaels Organization Educational Foundation has helped thousands of resident scholars achieve their dreams of higher education since Michael Levitt became the first affordable housing owner in the country to create a scholarship fund for residents. Scholarship celebrations will be held this summer in cities across the country.